A friend of mine took me to lunch at Farmers and Distillers the other day. It’s the same group that brought us Farmers Fishers Bakers in Georgetown and Founding Farmers.  Are you sensing a theme?  We thought we’d give it a shot since it was new and close to the office.  When we entered, the place was massive.  Of course, the first thing I noticed were the doughnuts on display.

Apparently, they make them fresh all day long.  Yum!  Everything on the menu looked heavy and a bit overwhelming, but good at the same time.  There was a wide variety of American takes on ethnic dishes.  Since we were there for lunch, we attempted to keep it light.  That failed immediately when we ordered the parmesan pound cake skillet. 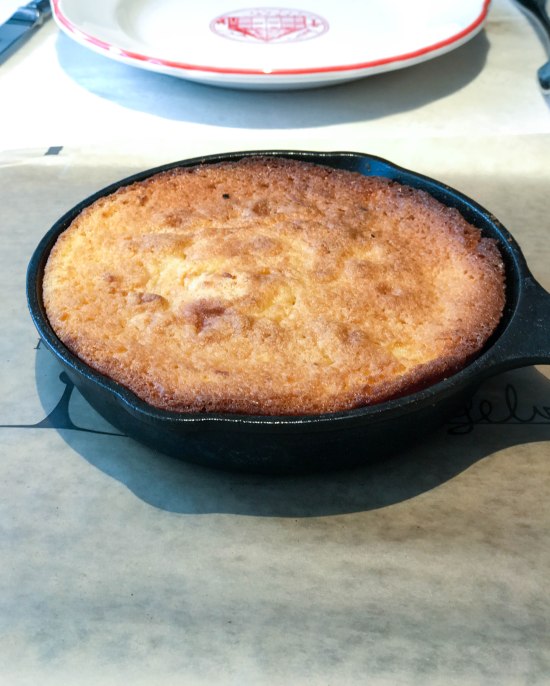 Our server kept reassuring us that it was more savory like cornbread, made with mascarpone and parmesan and not like a pound cake.  After slicing and sampling, it tasted exactly like pound cake made in a skillet.  A delicious pound cake, however.  We also slathered each slice with butter.  You may want to stop reading now if you think we’re going to proceed with a healthy lunch.  I was out with one of my favorite eating partners, and when I’m with her, no calorie is off limits.

It was good, but I thought it could use a little more oomph!  I think I would’ve liked more of an actual jam instead of sweetened onion.  Next up was the crab melt.

It was crab, “house” jam, brie and honey mustard on sourdough.  We had the option of a salad or fries, and went with the salad. LOL.  This was a geat melt.  I love crab, especially crab grilled cheese and this was very reminiscent of that.  I almost wanted to order another sandwich so I could have another half!

So what do you think we had for dessert?  A doughnut of course!!!

We decided to try the creme brulee doughnut.  The dough from the doughnut was great.  Very soft and not too sweet.  The custard was just a titch grainy (if I’m going to be super nit-picky), but it had a very nice and light vanilla flavor.  I do wish that layer of sugar on top was slightly thinner. It became chewy and got stuck between our teeth!  Overall I really enjoyed my lunch and I look forward to going back.  I think I will try the distillery portion of Farmers and Distillers next time.