My friend and I stayed right in the middle of the lower east side while in NYC. The neighborhood has changed tremendously (there’s a Whole Foods now?) since we lived there, but one thing hasn’t changed is finding good places to eat. We were so lucky to stumble upon Sweet Chick! 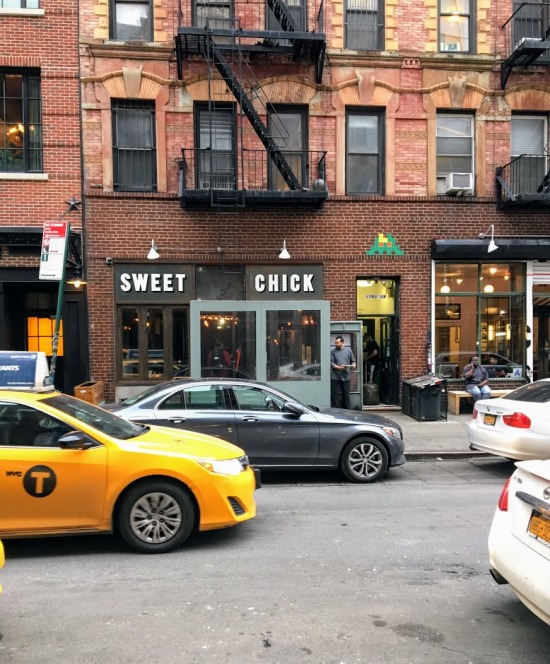 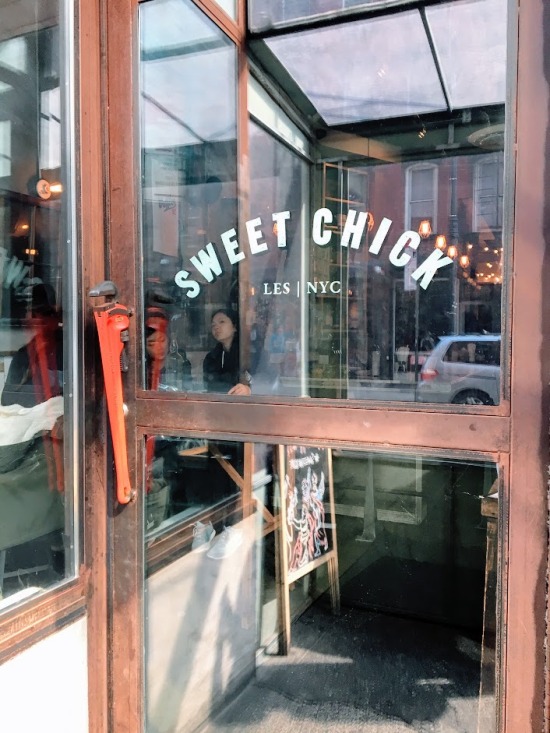 We checked into our hotel and were ready for lunch. Sweet Chick was just two blocks away. I knew I had to go when I saw a fried chicken sandwich on the menu. I’m so into them right now! 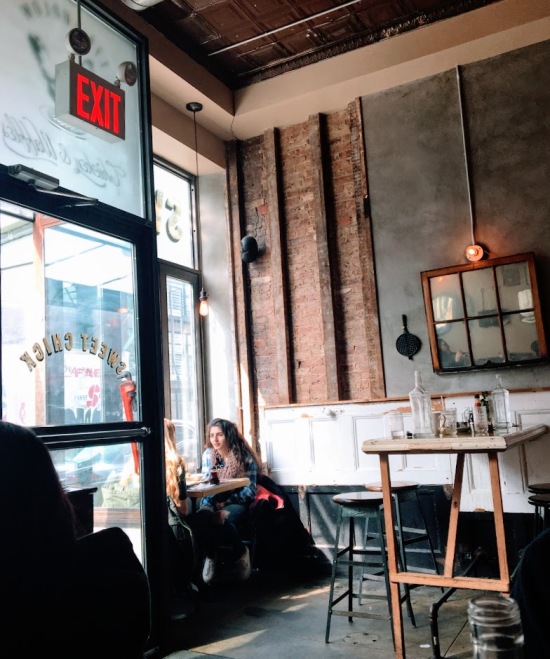 The place was roomy for NYC and was rustic without being too hipsterish. I loved all of the little details from the chairs, to the table settings. 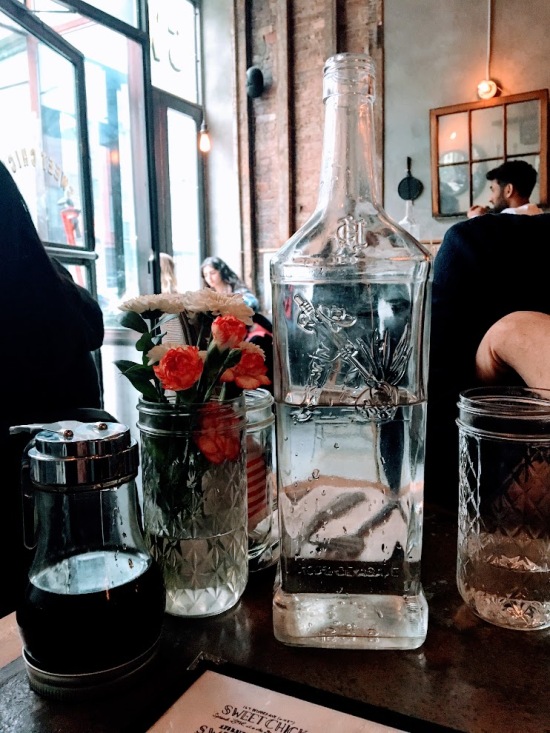 As usual, we started off with a cocktail. Boozy iced tea anyone? My brain really wanted it to taste like sweet tea lemonade with vodka, but it was exactly as described; sweet tea with vodka. I loved it. So far, good start.

My friend and I have a habit of ordering, or at least selecting the same thing whenever we go out, and today wasn’t going to be an exception when he declared that he was going to get the fried chicken sandwich. Since we’re on vaca, I couldn’t get the same thing so I chose the pulled pork sandwich.

I was a little intimidated and a little (read very) excited about my sandwich. I picked it up, took a bite and immediately sauce began to run down my hand. It was sooooo good! It was a Carolina style bbq, so it had that delicious vinegary tang with a hint of sweetness. I basically had to eat it as an open-faced sandwich because there was so much pulled pork on the bun.  This was not a complaint!

I took a bit of the fried chicken sandwich. It was good. Perfectly cooked, crispy and juicy, but the chicken didn’t quite fit the bun, and there wasn’t that much sriracha mayo. I have to admit that I liked mine a little better. Another thing that was very good were the fries. They were lightly crispy shoestring fries. Typically I don’t eat always eat the fries. I try to think of them as a condiment. Something to use sparingly. But this time, I cleaned my plate.

Guess who liked this place so much that they went back on their last day for brunch? We did!  Take a look at this spread!

Ordering chicken and waffles were a no-brainer for me. I saw someone next to me eat it when I was there the first time and the image stayed with me ever since. OMG this chicken was even better than the fried chicken sandwich. They did something completely different with this. It was definitely brined (possibly with thyme) and the batter was more southern. I don’t usually eat chicken on a bone, let alone wings, but I ate all of it. The waffles were also great. 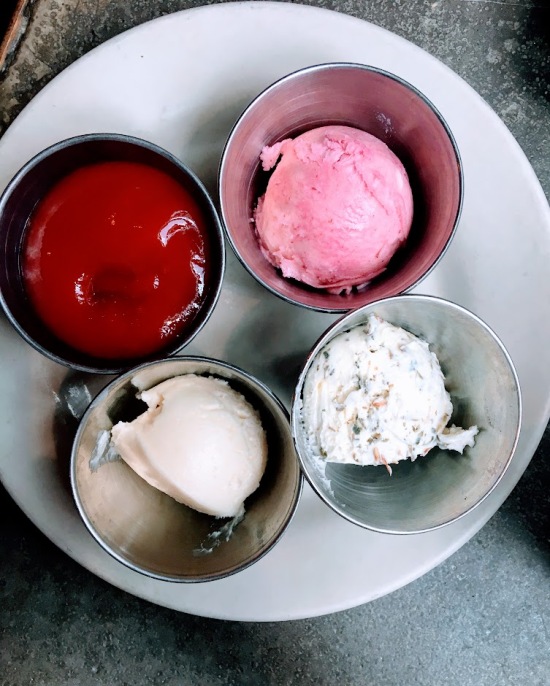 They were served with 3 types of butter. Strawberry, savory with thyme and rosemary, and traditional. And of course syrup. I tried all of them and the syrup. The savory butter was my favorite.

I also ordered a side of cheese grits. This is another one of my weaknesses. I’ve grown very fond of them over the years especially with bacon. These were fantastic! I still can’t tell what type of cheese they used (maybe just white cheddar?), but they also added onion, something I’ve never had with my grits. It totally changed the dish. I was going to order a side of bacon too, but my conscious wouldn’t let me. I’m glad I didn’t. I would’ve eaten the entire bowl. 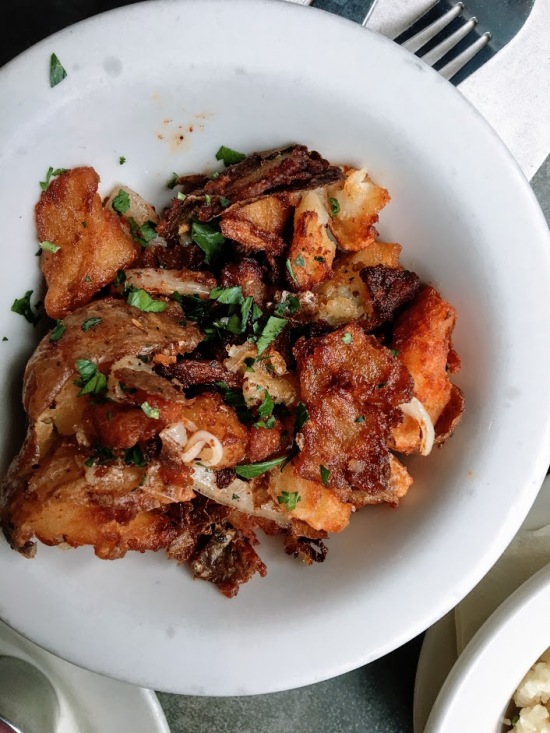 Lastly, we have the home fries. My friend is very particular about his home fries. He only likes “New York” style, something I’m still trying to determine because I was curious to see if the home fries he ordered what was he was thinking of. Well, the jury is still out, but he liked them. I did too. I liked them so much, I ate all of the little crispy bits left in the bowl and doused them with hot sauce.

This was the first time I’ve ever eaten at a restaurant for more than one meal. That’s really saying something. Especially in NYC. 😊