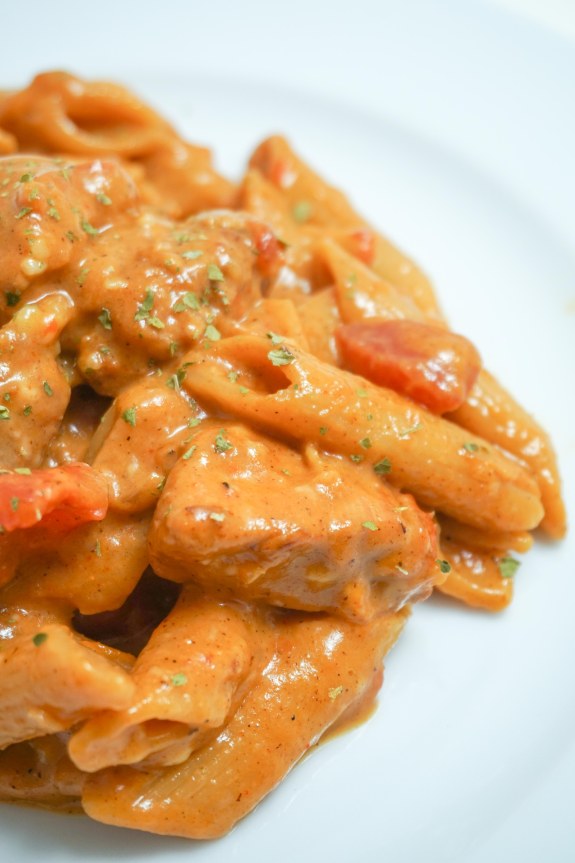 When I went to the market last week to buy Italian sausage for my fennel, sausage and asparagus recipe, they were out, so I bought andouille instead.  I ended up going to a different market later in the week, found Italian sausage and put the andouille in the freezer.  My friend (ok, so maybe he’s really my boyfriend) is a big fan of jambalaya, so I offered to make it for him.  Turns out he’s actually a fan of jambalaya pasta, something I’ve never heard of and sent me a recipe to try from Delish.  To me, the pressure is on when you’re making someone’s favorite dish.  You know it’s not going to be the same, but you also don’t want to ruin it for them.  Luckily, he’s going down the rabbit hole with me as I try out new savory recipes.  I get the practice while he helps me make the dishes, and gets a home cooked meal every week!

We made the sauce a little creamier than the recipe called for, and added parmesan cheese.  The Cajun flavor was not overpowering and allowed the spicy andouille to shine through. I also removed the casing from the andouille.  I prefer chunks of sausage instead of slices.  We both loved it.  I think the recipe serves four, but we liked it so much, it served two!