I spent last weekend visiting friends in New York. I love that city so much and for the first time in a long time, it felt like a vacation. I also love eating my way around New York and had a true adventure meeting a dear friend for drinks and dinner at M Wells Steakhouse in Long Island City. I told him earlier that I was in the mood for whiskey and meat and he definitely obliged. While I popped off to the ladies room, he took advantage and ordered for the both of us. It was definitely a culinary adventure!

When I returned to my seat, I was presented with a little bag of hot, soft, pretzel rolls with mustard. It’s their version of the complimentary bread basket. What followed was an amuse bouche of trout stuffed peppers, compliments of the chef. I’ve never been a huge fan of trout because I thought it was too fishy, but this was very light and delicious.

What followed was a large Caesar salad with a smoked herring dressing that was covered in finely shredded parmesan. It literally looked like a huge pile of parmesan, but again, delicious.

Now to the “interesting” part. Steak tartar. I’ve only recently started warming up to sushi, so the thought of eating raw beef with a raw egg yolk was not high on my bucket list. Actually, it’s not on my bucket list at all. I don’t even eat eggs (never liked the flavor). But I pulled up my big girl pants and spread a little dollop on toast. Oh my, it was way better than I even imagined. It was so well seasoned and I didn’t notice the raw yolk at all. I enjoyed it even more when I was able to ignore that I was eating raw meat and egg. 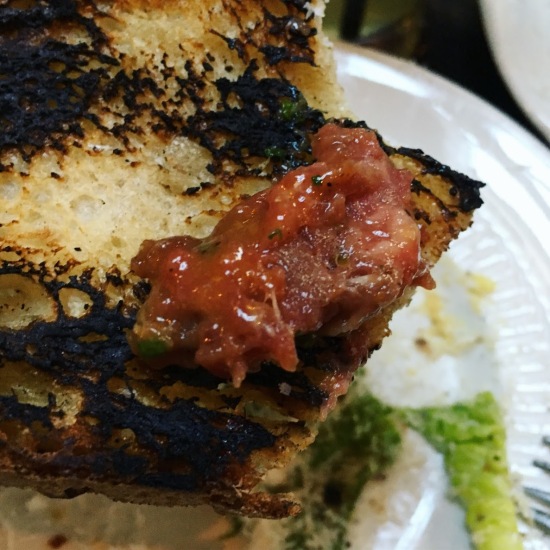 For our main course, there was the pig’s head in a mustard sauce with cornichons. Yes, I said pig’s head. Ears, snout, brain, and teeth! The only part missing was the eye.

I grabbed my knife and fork and went for it. The skin was crispy and mouthwatering and the meat/fat underneath was buttery and rich. It was like eating a huge piece of pork belly. I really enjoyed the ear and jowl. My friend headed for the snout. No thanks for me! I had to draw the line somewhere. I think this meal will have to go into the record books for eating the most foods for the first time in one sitting.