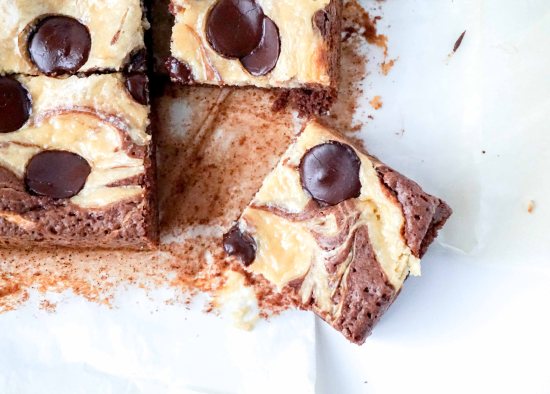 So about a week ago I went to the store hoping to buy a pint of Baileys Irish cream.  The store was out of pint-sized bottles, so I bought a fifth, came home and made the cinnamon chop bread with an Irish cream glaze.  Now, what to do with all the leftover Irish cream?  Put it in my coffee? My hot chocolate?  Add it to chocolate milk?  Pour it over ice cream?  Actually, all of those ideas sounded heavenly, but I really didn’t want this bottle to linger in my house, so I began to think of another dessert I could make a little boozy.  Brownies!  Better yet, cheesecake brownies!  It was something I’ve never made before. Well, I’ve never made a cheesecake before. So Irish cream cheesecake brownies it is!

I was going to go with my tried and true brownie recipe, but I’m always game to try others, and adapted a recipe I found on epicurious.  The brownies were pretty tasty.  I loved the chocolate/cream cheese combo and the Irish cream added a nice delicate balanced flavor to the cream cheese.  I wasn’t too happy with my swirls on top, so at the last minute, I added a few over dark chocolate wafers and sprinkled them on top.  I thought that made it even better.  They were like little bursts of chocolate with every creamy cheesecake Irish cream bite.

for the cheesecake batter