This recipe had me at the picture. The frosting looked so glossy and soft. Then I read the list of ingredients. Mayo? Salt? Olive oil? Caramel and chocolate? I’m so there. I’ve always wanted to try a mayo chocolate cake so here was my chance.

I have to apologize for the pictures on this post. I let the cake sit in the fridge for a couple of days, so the frosting became hard (not in a bad way), and wasn’t as shiny and pretty as the first day, and the cake looks a little dry, but trust me, it’s still super moist. Also, I was awesome enough to make a mistake right out of the gate. With most recipes, I’m used to creaming butter with sugar, so I automatically started creaming the mayo with the sugar. Then I read the directions. Crap! You’re supposed to mix the eggs with the sugar, and I just used the last of the mayo. Crap!!! I stared at the mixing bowl for at least two minutes trying to decide if I should chuck it, or push forward. I decided to chuck it. Then I spent another couple of minutes deciding whether or not to make a store run, or use Miracle Whip instead. I went with the Whip. The rest of the recipe came together just fine and smelled awesome. I didn’t have 8” pans, so I used my 9” and prepared myself to keep an eye on the baking time and realize that my cake might not be as high. 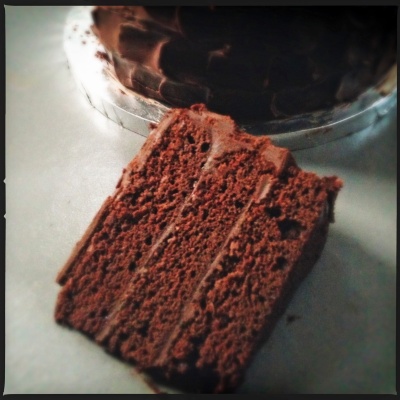 Moving on to the caramel. This process went fine, make caramel, added salt, blah, blah. I then melted the chocolate as instructed and started sampling as soon as it melted. Meh, I really didn’t taste the caramel. Just chocolate. But very rich, creamy, chocolate. I added a bit more salt and that helped a bit, but I still didn’t really taste caramel. Oh well (understand, it was still delicious). While adding the butter, my arteries began to harden and it finally occurred to me that I was making a half buttercream/half ganache like frosting. I could’ve easily poured this mixture in a mold and made candy bars. They would be a mess once they melted, but they would be delicious.

Anyway, back to the cake. The cakes turned out fine and the assembly went as expected. I decided not to add the salt between the layers because I knew I wasn’t going to cut the cake the same day and I didn’t want the salt to dissolve into the cake. 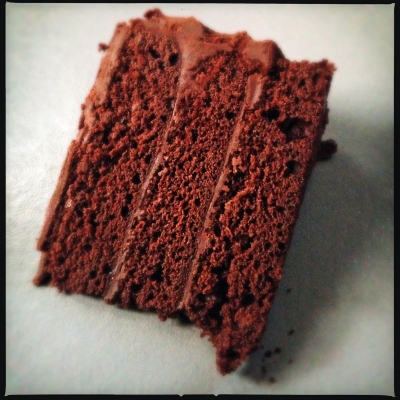 So a few days later I cut the cake to take pics and assumed that the cake would be dry. It wasn’t! It was still really moist, and delicious. I was pleasantly surprised. I didn’t even miss the butter. Since mayo is nothing more than eggs and oil (not sure what’s in Miracle Whip), you still get the richness. It could’ve use a teeny bit more salt. I’m sure if I put salt between the layers that problem would’ve been solved.  I’m going to play around with the frosting a bit more, but I’m definitely going to make this again for the holidays.