I saw an article on Huffpost and had to do a double take. Ice cream bread? It sounded like some kind of oxymoron. I couldn’t understand how this could be possible. The recipe only called for two ingredients, ice cream and self-rising flour. I had to see this for myself and I was dying to know what it would taste like. I went to the store and spent about 20 minutes staring at ice cream containers trying to imagine what they would taste like in bread form. The obvious choice would have been Chunky Monkey, but I didn’t have any ripe bananas at home, and wasn’t going to make the same mistake with quick ripening them. I couldn’t imagine bread with peanut butter cups, snickers or pretzels in them, so those were out, and coffee just didn’t seem interesting at the time. I finally decided on Benn & Jerry’s Karamel Sutra (which wasn’t the best choice, but after 20min of over analyzing flavors, I closed my eyes and just grabbed a container). 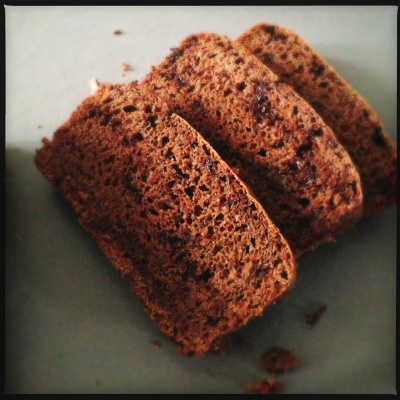 The result was interesting. I was amazed that after 30-35min, I had a loaf of bread sitting in a pan. The flavor wasn’t that bad either. I added chopped chocolate chips, just in case the bread need some oomph. The bread was very moist like a quick bread and was perfectly sweetened, but overall lacked flavor because (I’m assuming) of the flavor of ice cream I chose. Also, it was a teensy bit on the salty side. I made my own “self-rising” flour, so next time I will cut back a little.

I’ve already decided to try it again. Yesterday I bought a container of ginger ice cream that I’m excited about. I’m going to add a little extra crystalized ginger and lemon zest to this one.

Preheat oven to 350°. Lightly grease a loaf pan. Let the ice cream sit out on the counter until soft. Whisk together flour, baking powder and salt. Combine all ingredients in a mixer with a paddle attachment and combine until smooth.

Smooth batter in pan and bake for 30-35 minutes or until an inserted toothpick comes out clean.